The semester is winding down, and this scene of our family juggling act is coming to a close. Every time someone asked me how my semester was going, I was privately bemused: This semester was SO not about the semester. It was about the three days a week that I spent my mornings with Junebug.

When the semester started, Junebug was doing ok, but not wonderfully. He wasn't sleeping wellat all, and more importantly, he wasn't gaining nearly enough weight. At 3 months, he had fallen off of the bottom of the growth charts. There were aspersions cast on Willow's supply of breast milk, whispers about formula (which was fine for the twins, but which we wanted to avoid if we could), allergic reactions to the first few formula types we tried, a LOT of spit-up, and some quite sleepless night. Reflux was discussed, but because he has generally been such a laid-back, happy baby, he wasn't crying in the way that a normally collicky baby would, we weren't really focused on that too badly. 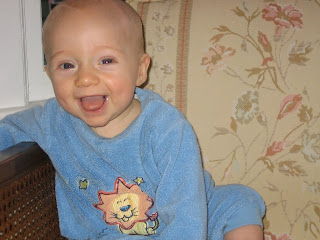 Well, about six weeks ago, we moved him to to prevacid and started him on solid food. Bingo.

He's gaining weight, sleeping a little bit better (though still not what we'd like, honestly). But at six months, he's getting ready to sit up, he's doing the beginnings of an arm-crawl, and he's cutting a tooth. Adorable, so says his dad.

In the meantime, I'm merely trying to keep up with the classes I'm teaching (which has gone, well, fine), while doing a little writing here and there. This particular ratio of work-life balance isn't going to be sustainable for long (after all, my tenure file is due in one year), but for now, it's been the right choice.

Next semester, I'm teaching a new grad course, and I need to have the bulk of this book manuscript in order to get out the door by, say, September. And as I mentioned, the tenure file must be assembled and submitted. So 2010 will look (had better look) a lot different from 2009. That's a good thing, in certain ways, but there will be a lot about this semester that I'll miss, too.
Posted by Horace at 12:52 PM

I hear you about the semester being about the family and Junebug rather than being a professor and doing that professorial work. For me, it's weird that I focused on so hard on becoming a professor and that work was really the center of my life. Now that I am a professor, it feels more like a means to an end, a job so I can take care of and be with the family. (Not that I haven't done a huge load of work this quarter, but it never feels like I'm doing enough, though I think this is my imposter syndrome.)

Junebug is adorable! I'm sorry about his eating troubles, but he looks healthy and happy to me -- and in the final analysis that's all that matters.

I can't believe you have going up for tenure staring you in the face. (I know you'll be busy, but I hope you blog about that!)

Happy holidays! I hope the semester is almost over for you too!

So cuuuute! So it was acid reflux? How strange!


I hope you and all the little cuties have a wonderful winter break!

Thanks guys...Junebug is now doing great, so we do feel like we dodged a bullet. What remains is simply parenting three and doing life, which is, frankly hard enough.

And EE: hopefully I will be back on track enough that I'll be able to blog a whole lot more than just my tenure process, though that shouldn't be too bad: our requirements here are amanzingly clear and remarkably humane. I'm actually not too worried.

What a beautiful boy. Sorry about the sleepless nights and the early feeding issues. While I haven't entirely forgotten how incredibly difficult that first year was (and I wasn't even on the tenure-track yet!), I can't help but miss those long mornings and afternoons at home with the baby. Willow is lucky to have such a supportive and involved partner.