Not that I am here briefly, I am posting briefly. At this MLA, I've met up with many old friends, presented my paper successfully to an audience of five people I already know on a first name basis, interviewed some really good candidates, been to a couple of nifty panels (including part II of the panel I was on), met some bloggers in real life (Dr. Crazy! Flavia! Dr. B! Mel! Nels! others famous and not so much!), maybe found an online publication for the paper I obsessed over for this panel, walked a lot of miles, didn't go to the Narrative Society party.

But now, it is time for bed...bed bed bed bed bed. Nighty night. More soon.
Posted by Horace at 11:39 PM No comments:

I posted last a week ago, and haven't posted since, because:
So I may not be posting much over the next few days or even weeks, because somehow, my break ended up busier than the very busy weeks at the end of the semester.
Posted by Horace at 9:16 PM 5 comments:

Because it's all about the grading this week.

As a kid, I loved Christmas, a lot, and for all of the reasons that middle-class white Christian kids often are, from the warm fuzzies to the consumerist frenzies. But of course, through the stresses of family, the hypercritical approach to culture of this profession, years of MLA mania, and plain-ol' jadedness, Christmas had lost a lot of its sheen. Oh I still love me a fresh-cut tree, and some Nat King Cole in late December, but I've become a New Year's type more than a Christmas type, whatever that is. But man, these kids...they remind you. Now three, Rambunctious and Imperia are really experiencing Christmas for the first time in many ways. The cookie making, the tree trimming, the wrapping paper, the extra sparkle and glitter of life when you're three and it's Christmas.

A story: while I got to sleep in the other morning, Willow and the kids wrapped some presents for under the tree (we're waaaaay ahead on preparations). Imperia, wearing her pajamas, laid down in the middle of the paper, and declared, "I will be a present. Wrap me!" 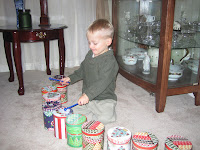 The advent calendars are up. The tree is decorated. Stockings are hung by the staircase (what can you do?) for most of the twelve people who will be here for some long stay over the holidays (Now all I need is a really good eggnog recipe). Many, many gifts are wrapped (though some are not yet purchased). It's only early December, but somehow, I'm more excited about Christmas than I have been in years.

Taxonomy: munchkins, You know...that other thing...life

A colleague writes me to ask:

How is the GRE weighed with respect to the other application materials? [One of my students has] taken the GREs twice and isn't happy with her scores. She's concerned that she won't be accepted into any graduate school if she doesn't fall within the 60th percentile.

I was on the grad admissions committee last year, which is why she writes me, but it was only one year. My impulse, in a program that's not supremely selective, is that while we have a recommended cut-off, a strong application will supersede weak scores. That said, and this is probably not a popular thing to say, scores and the quality of the rest of the application were often (though not always) fairly congruent.

Those of you at different types of grad programs: How do test scores weigh into your admissions processes?
Posted by Horace at 6:17 PM 2 comments:

It came and went without much fanfare, and is a little trimmer than others (we've been busy), but the selections are meaty, and tasty. Thanks to David Silver of Silver in SF for the work.
Posted by Horace at 10:39 PM No comments:

Life Happens in Between

I am sitting at the red light, waiting to turn left. I've been listening to a song on our college radio station--the refrain: "Don't wake me. I plan on sleeping in." A few flurries glide down. The sun glances through a few heavy cumulus clouds. Four or five cars pass by, drivers on cell phones, drivers talking to passengers, drivers listening to the radio. I am, at that moment, only observing.

The "being" of life comes into focus in fleeting moments, in between the day's doings, its conversations, its thoughts, its plans, its expectations.

The light turns green and I start thinking about posting to the blog, about the meeting I'm coming into campus for, and life has moved onward from that still, quiet moment.
Posted by Horace at 1:25 PM No comments:

Last Friday, I went into class to collect a batch of papers from the survey class. I expected to get 26 papers (from an original enrollment of about 36). Most everyone was present, which was a good sign, even one student who contacted me to tell me he wasn't going to have his paper ready and wanted to know the standard penalty to know whether it was worth the extra time to get it up to snuff...

But while most of the students were there, a bunch of them didn't look so hot. Like they had been up all night. One student noted that he had spent Seven. Whole. Hours. writing this paper (He said this as if it were a really really long time to spend on one paper. Others didn't complain, but clearly didn't look like they were in great shape. I asked a few questions, and it seemed like several of them weren't really happy with the results. So I made a deal.

If they were happy with the paper and ready to turn it in today, they'd get it back by today with a full set of comments (anywhere from a half to a full page of typed, single spaced end-note, plus extensive margin comments). This is significantly faster than I usually turn around papers, but I figured I wouldn't be grading the whole set. If they wanted, though, they could have until Monday )today) to work on the paper, and the only thing they'd forfeit would be comments--no grade penalty. Lateness penalties began accruing today then.

So of the sixteen who turned it in on Friday, a few clamored for extra credit, and I told them that I couldn't give extra credit for doing the work expected of them--that I respect their ability to get the work done in a timely manner, and I would show that respect by treating their papers carefully and responding to them thoughtfully. They had the option everyone else had to take the extension if they wanted it. This seemed to appease them, but some still had a look about them as if they had just been robbed of something they didn't know they had. I don't know...maybe that was the case.

What I can say is that the average grade of the papers I collected Friday and returned today was a full letter grade higher than the class average for the last paper. Which should tell you
who was really prepared on Friday and who wasn't. Of the ten students who took the extension, six turned their papers in today, and two of those who hadn't still came to me today looking for direction on the paper, 'cause they were still stumped (uh, hello? what about the three weeks that you had the assignment?).

Anyway, I've glanced over the papers from today, and they actually seem like improved work from the students who had been performing, well, in a more lacklustre fashion earlier in the semester.

So did I give the slackers too much of a break? in the end, their work is better, and my reading load is easier. Did I short-change the student who were prepared? Was thoughtful and extensive commenting a sufficient "reward" for their being prepared? Am I gonna catch this on my evaluations this week?
Posted by Horace at 4:31 PM 8 comments: