Oh, yes, that. It seems to me that after the intensity of two grad classes in the last six months, coupled with the writing onslaught that is coming, I should probably take up some pleasure reading. I've done very little in the last year, knocking off maybe four books that I can honestly say I read for my own personal interests, Angela Carter's The Magic Toyshop, Terry Galloway's memoir Mean Little deaf Queer, Salman Rushdie's The Enchantress of Florence, and Orhan Pamuk's My Name is Red. Despite that smallish number, I am pleased to say that I enjoyed them all immensely (though the Pamuk will stand out as a giant among giants in that list).

I've also been reading a good deal of short fiction. Willow's work keeps me engaged there, and the New Yorker's fiction issue has kept me well stocked for a few days. I quite liked Jonathan Safran Foer's short piece there, enjoyed Rivka Galchen's and Philipp Meyer's pieces, too. Last week's fiction from Nicole Krauss was beutiful, but ended on a bit of a baffling note, and I'm eager to read Sarah Shun-lien Bynum's story "The Erlking" in the issue that arrived today. Her novel Madeline is Sleeping is a pure unadulterated joy.

But for my birthday, I got a big ol' Barnes and Noble gift certificate, and purchased five books that I've been looking at for some time, reviews I've read, Amazon recommendations, etc. And then, last evening, I ran my fingers along my bookshelves to pull another dozen or so possibilities.

So here are several novels on the short(ish) list for next thing to read. Happy to take votes of confidence. There's no rhyme or reason to the order.
So obviously, some of these are Books I Should've Read By Now, but that might be a disincentive to choosing them as pleasure reading. Your thoughts welcome.
Posted by Horace at 5:23 PM 7 comments:

So....The blog has been neglected for some time now, and so I thought, "Hey! Why not a new look to neglect?"

The projects are piling up right now, and I've got a lot of work to do to catch up. But several things are on pins and needles around here--spotty childcare, Willow with uncertain employment options, a tenure case to prepare for, and an ms. to finish, so I feel like this space might be useful again. So we'll see.
Posted by Horace at 1:24 PM 1 comment:

Summer session over, comments still left to put on grad papers from both this session and last semester (cringe), book to finish writing by end of summer. But right now my eyes burn from reading papers on the screen all day. But maybe soon I'll post more often.
Posted by Horace at 10:35 PM 1 comment:

Happy birthday, my littlest one. It's been a very good year (and a week, since I'm late here).


But a picture from his first birthday, followed by historical precedent: 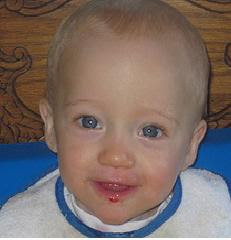 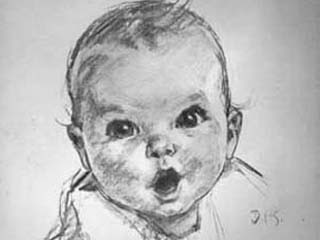 So. It is time. I am beginning, in effect, my critical year.

Let me be clear here. My department, despite the many flaws of the larger institution, is a really good place to work (for those of us privileged to be on the tenure track, at least). The teaching load is a humane 2/3, and the minimum publication requirements for tenure are a very humane four major articles (there are more recommendations that surround that baseline, but still, that's the baseline.

By June now, I have begun the early steps of the tenure process.

Step One: Introducing Myself to the Committee
So that they could begin to choose evaluators, the committee that covers tenure and promotion required a brief paragraph from me to determine good matches. As my work is eclectic in subject matter and ecumenical in approach, and worse, constellates around a book project that will NOT be part of my tenure file, this was not an easy task. But there it is. Short story? I do modern drama. Longer story? I do modern drama and performance studies as it relates to gender studies, life writing, narratology, contemporary British literature, cultural studies and (occasionally) composition pedagogy.


Step Two: assembling the list of external evaluators.
So BRU doesn't offer an honorarium to evaluators, and because of some hitches in the way that our Evaluation Committee (EC) (which handles both annual evaluation and T&P) is constituted, we get a late start on collecting names of potential external evaluators. Which means, with nothing bu good will to offer in return, we call evaluators late in the game, after they've often already agreed to review sometimes multiple other cases. This means that the luxury of choosing a few really wonderful outside readers is mitigated by the likelihood that the most wonderful readers very well may decline the request.

So the process is this: The (EC) and I both submit lists of potential external evaluators. In the past and elsewhere, I've heard that each body gives 5-6 names, and the chair collates those lists, and after I vet them for any material conflicts of interest, gets them approved by the Dean. Once the list is approved, he calls down the lest to secure between 3-6 external evaluators of the case. Because of the likelihood that those requests might be denied, though, both I and the committee were asked to assemble much larger lists of possible readers (somewhere around 40-45 between the two lists). This means that the bottom of the list ends up with people much further afield from my work than I might like, and also that the list inevitably includes those few people on the list who, for whatever reason, don't like me, or my work, or my approach, or (relevantly) the fact that I'm a man doing feminist studies in performance.

But, as of the end of May, I understand that both lists were generated, collated, approved by the Dean, and that readers were secured.

Step three: Assemble packets for External evaluators.
This would seem straightforward, but there are two parts, and questions about each.
So that's where I am now. Making copies of articles, drafting the letter (the chair is glancing over it as we speak), and fretting about the most unknown part of the process. Wish me luck.
Posted by Horace at 2:56 PM 5 comments:

In the bustle of the end of last semester and the beginning of the summer session, I neglected to post anything on Willow's completion of her MFA, which along with an MA in English, means that she's actually taken more coursework and defended more prose than I did. huzzah!

In tribute, I want to post links to a few of her publications, now available online, because they are teh awesome, and you should read them. Now. Even if you've read them before.

Other publications in print-only include "Pas de Deux" (Madison Review, 1999), "Distance Driving (Fourth River, 2007), and "In Search of a Smaller Bar Scene" (Evansville Review, forthcoming). More is in the submissions till, so keep your eyes peeled!
Posted by Horace at 9:42 AM 2 comments:

Ti-i-i-ime ain't on my side

I have begun to hit something of a rhythm in managing the summer grad class, which is turning out to be a really fun, interesting group of people on what is to me an immensely engaging topic. Who wouldn't have fun with two consecutive days on authorship?

(On a side note, I think that for many cultural-studies-trained folks narratological formalism seems archaic and a historical, but these discussions on the building blocks of story-making, with old questions like the place of authorial intent, are not useless to today's graduate students, and indeed continue to provide and effective vocabulary and critical framework for how texts carry cultural information.)

I have in fact hit enough of a rhythm that I am now dipping my toes back into the writing pond, finding that the waters aren't as chilly as I'd imagined they'd be. A paragraph of an old article on Tuesday night, some brainstorming notes on chapter 3 last night, and today who knows? The problem has been that these little bits of writing time have been stolen moments: 15 minutes here while Willow read the twins a bedtime story, 10 minutes there as I pulled over on the road, opened my laptop, typed in some ideas, and got back on my way to pick up Imperia from a playdate. No article, let along book manuscript will be successfully produced this way.

No matter I suppose, Summer Session I is over in three more weeks, after which a 6 week vista opens up for me to write, write, write, at which point I will have little choice but to do exactly that.
Posted by Horace at 9:18 AM No comments: