You'd think that with the Junebug coming, and all this writing I have to do, that we'd be trying to conserve out energy, but no. In fact, we're just laying in to all kinds of projects. Among them, preparing for a possible move.

What? you say. Why would you want to move now?

To a smaller house.

Umm, Horace? You're going to have more people, so you'll need all your space, if not more!

Actually, our house if freakin' huge. Coming from a major metro area to this small town, we got reverse sticker shock, and purchased a very large home. Like seven rooms that could be bedrooms, with 4.5 baths. We once housed six additional guests and everyone could sleep in their own bedroom, or with their partner. we love how much space we have, we love the room for romping around, we love the amount of space it has to display our stuff, but it is LARGE and more expensive than we need. Plus its location outside of town over two ridges in a snowy part of the country that apparently doesn't deal well with snow, with a longish and very steep driveway and yard has not endeared me (who does the driveway shoveling and lawnmowing) to it much these few years.

Anyway, we're thinking a smaller house in the main downtown neighborhood where all our firends/ colleagues live would be nice and economical, saving on the mortgage payment as well as on gas.

So in a couple of weeks, we're going to test the housing market, putting ours up, and seeing what we'll be able to find downtown for ourselves.

Though we are half-prepared to fail in this endeavor and spend next year in this house just like this one, we still ahve to prepare as if we could be movinig in two-to-six months. And so we are getting our house ready to show. I've been watching HGTV obsessively for tips on "staging" the house, and while the yard is going remain a liability (It's hard to ahve curb appeal when you'r house is 25 feet higher than the street--side note: I went to college with the host of "Curb Appeal." We were very good friends)).

What I have been doing is organizing, picking up, clearing bric-a-brac and personal photos, and cleaning smudges on walls and preparing to paint the basement, and clearing out the garage, and...

You get the picture.

I feared that this would actually get in the way of writing, but it seems to have been a pretty good way to expend nervious energy that might otherwise be spent on facebook, or reading every article on Salon.com, or obsessing about the latest forecast for snow. It hasn't stopped me from reading Super Bowl analysis, as I am a Steelers fan from way back (when I first "rooted" for them as a small child, they had only three Super Bowl titles...)

Wow, I am in random mode tonight.

So anyway, to summarize: selling house (maybe), cleaning up, packing away personal stuff, not procrastinating as much, etc. etc. The point is:

We have a LOT of stuff. a LOT. I wish I could say that this has spurred me to cleanse my life of clutter and simplify, but really it just proves to me that despite my vaguely Marxist leanings, I am a bourgeois bastard, and I like my random pointless conspicuous consumer goods: all the linen napkins, the pottery barn vases, artistically candid photos, the Martha Stewart arrangments on end tables and mantlepieces. And so if we don't sell this house, out it will all come again, the personal clutter that makes this place home.
Posted by Horace at 8:27 PM 3 comments:

So despite the fact that between snow, sniffles, and holidays, we've had one or both kids home something like 35 of the last 43 days, I've actually been quite productive. I've prepped the one class well enough that it hasn't taken any appreciable time, beyond that day's prep, and the major committee I'm on has merely been enough of a break from the writing work I can get done that it hasn't really interfered.

The writing, then has proceeded apace. I've been doing some reading for the talk I'm doing in March, which is really exciting. That's a bit of a slow start, but I've got time for that.

The faster work has come on the book project, whose first big project was to complete re-write what had initially been a perfunctory dissertation introduction composed in two days in March, and re-frame as a full-on theoretical framework for a book project that is actually making an intervention in a field, not simply trying to get past five sympathetic readers.

Anyway, I had made some good initial progress before the holidays, but after the trip to California, and the subsequent siege of snow and sniffles, I'd gotten away from the writing. Anyway, about a week ago, the editor I met with at MLA emailed me back, saying she was "intrigued" by the project, and wanted soft copy of the proposal to pass around to some "advisors."

Since I had hoped that the introduction would be part of the sample materials I sent on, I buckled back down to write, and now have a 35 page draft of which I am exceedingly proud. Willow's reading over it for prose and the non-specialist's perspective, and a few others are looking it over this weekend, but that one big obstacle is now mostly of the way.
Onward!
Posted by Horace at 2:22 PM No comments:

What To Do with the Days Off

We're in a part of the world where right now, our nostrils freeze when we step foot outside, and since this is a fairly uncommon state of affairs, schools have been canceled for a couple of days. On top of a few minor illnesses and an unusually long holiday break from school, and we've had a LOT of time home with the kids in the last month.

Fortunately, Imperia and Rambunctious have just hit the stage where they are able to focus long enough for some selected board games, many of which were new from Christmas. Of course, we're already well acquainted with Chutes and Ladders and Candy Land, both of which are often played, well, creatively. They also enjoy a few well-designed movie tie-in games: a hand-me-down Lion King and a cool new one that ties into Madagascar II. I am generally not thrilled with the highly branded/tie-in toys, but in these cases, the design of the game really appealed to us: both games mix in collaboration with the competitive nature of the game, which is really important for twins (probably all siblings, but certainly twins).

Anyway, these lead us to discover Princess: A Cooperative Game of Discussion, Logic, and Rescue. The gender politics of the damsel in distress is mitigated by the fact that Imperia is the one who like to be the one to save her, and the game is flexible enough that we've added our own self-designed cards to the game play.

But we also decided that the game would import well to other narrative worlds that our children enjoy, which right now (for both of them) revolves around superheroes. To wit: We "invented" Superhero: A Cooperative Game of Discussion, Logic, and Capture. We spent the whole morning yesterday with the back of a pizza box, some printed-out graphics from images online, and the template that Princess offered us. The result: 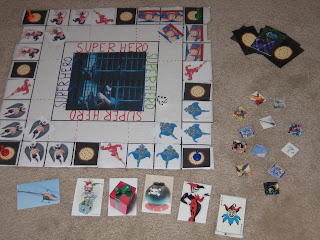 We've put it away only once since we designed it, and it came back out almost immediately. (And Imperia likes to be the one to capture the Joker, too).
Posted by Horace at 7:45 PM No comments:

It's a new semester here at the blog and after very spotty blogging throughout most of 2008, but esp. the last half, I'm revisiting blogging anew to see where it will fit into this stage of my life and career.

So here's what's up ( a re-cap for newish readers):
*We're expecting a baby in June: scheduled for June 15, to be exact. This will bring us to three, along with five-year-old twins Rambunctious and Imperia.

*This semester, I'm teaching the theatre tour class, a version of which I taught two years ago, taking a group of students to London--the first time for many of them, and for me, too. It was a really great teaching experience. This year, because of budgets and airfare and the Junebug (from here on out, the nickname for the baby until a more suitable one makes itself manifest), we're keeping our travel regional, thereby reducing the student expense by about 80%. Still, I've got a bunch of 14 fantastic students, most of whom I've had before, and at least one of whom has never seen a professional play before. I'm stoked about the class.

*This is also the only class I'm teaching this semester, since I have a pre-tenure two-course reduction to work on my research. Now I already have enough in the way of individual articles in print to make the basic benchmark for tenure, but I've got lots of other irons in the fire, all most all of which will garner serious attention:
Why the hell am I blogging? you may ask. Well, there are several reasons. One, I missed not actually being in bloggy touch with all the people at the meet-up in SF. Two, I find that procrasting from writing with more writing keeps me close enough to the original task to be helpful; the most productive summer of my writing career also had a lot of blog posts. Three, warm-ups: though I write in flurries, I don't dive in well, so I'm hoping that a bit of blogging on a given day will begin a bit of other writing on the same day.

So that's it in a nutshell. Hopefully you'll be seeing more of me before too long. Wish me luck!
Posted by Horace at 8:14 PM 4 comments: