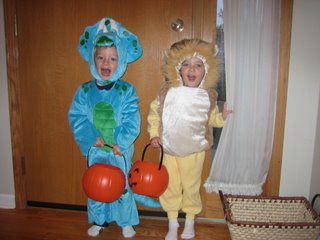 The kids went about the neighborhood this past weekend (our neightborhood celebrated Halloweekend, the bourgie offshoot of Halloween), their first time doing the ol' Trick or Treat. Rambunctious (on left) was a triceratops, which made him extraordinarily happy after having seen a real triceratops skeleton at the dino exhibit earlier this fall. At first, it was just "ceratops," but after a good bit of practice, he's got the whole latinate monstrosity in his lexicon.

Imperia was, as you may be able to tell from the picture, a lion...particularly appropriate for she who is empress of the universe. If we're going to dress as something lesser than ourselves, we might as well be queen of the jungle, mightn't we?

Anyway, Monday was also their third birthday, so Sunday we also had a birthday party, where the kids also, for a time, wore their costumes, which will make about twenty days in the last month in which they were worn. As you may guess, there's been a bit of roaring around our home of late.

As for me? Well, let's just offer up my vampire name, as seen at Ink and Incapability:
What's Your Vampire Name?

Chloe wore a very similar lion costume when went as characters from Wizard of Oz a couple of years ago. Love the triceratops costume too!