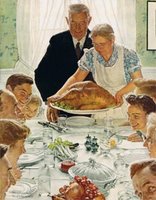 I also find myself thinking of the premise of Brookings Fellow Gregg Easterbrook's most recent book (which I admittedly haven't yet read), The Progress Paradox: How Life Gets Better While People Feel Worse. I've heard some skecpiticism about the book, but the basic idea seems to be that despite more widespread access to basic necessities, general wealth, and luxury items, today's "average American" (whoever this may be) is no happier than at any point in history. It's a premise that, in general terms, I buy, and whatever Easterbrook's argument may be, I tend to locate this disconnect from goods and happiness to a few things: the fact that much happiness derives from interpersonal connections, the fact that goods do little if anything (past subsistence) to impact overall contentment, and the persistence of American consumer culture in creating desire for consumption goods without locating any tangible grounds for actual satisfaction of that desire.

The Rockwell image offers us a smiling white middle-class family eating a traditional, white-middle-class meal, lavishly (though not ostentatiously) laid out at the family table. We read from this image the joys of family, the pleasures of abundance, the availability of "the American Dream." Our hopes for an idyllic holiday (Thanksgiving, Christmas, Sabbath, whatever) are raised, given form, made expressable, by this image.

I submit the following image as a point of comparison. You see a w 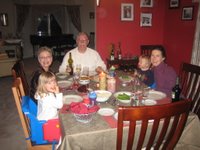 hite middle-class family (I'm behind the camera), smiling, dining together on a lavishly appointed table filled to brimming with food, a table that was days earlier filled to brimming with another meal for another group of middle-class white Americans. Say what you will about the image. But what isn't here is the recent news of a devastating lung cancer diagnosis from a close relative, which is why we're eating here this year, not to mention numerous worries, serious and self-indulgent, about finances, health, career, relationships etc. They range from undiagnosed chronic illnesses to small bits of grading that needs to be done.

Many people have taken time to be thankful for all the good things this year, but I think it's particularly important to separate out gratitude from this mysterious notion of freedom from want. I'm not sure that freedom from want is int and of itself a good thing--the Easterbrook premise suggests that those who have everything are not actually that much happier (just better fed) than anyone else in particular. What that means is to me is that I am grateful for all of the things in this picture: the parents and children, the spouses, the laughter, the joy, the food, the lavishly appointed table, the house that shelters us, the health that we do have... all of this in addition to the illnesses we also have, the spectre of death, the anxieties, the anger, the pain, the annoyances, the fear.

To want is to live, and to need is to be alive. This year I am grateful for what I want and need, as well as all I have, which is plenty.
Posted by Horace at 1:39 PM